Spike and Suzy – The Helping Hand

The Dutch version of this adult parody comic was released in 2013. However an English version was done at the same time I didn’t finish it until 2014. Experiences from the past have shown that the used characters are only famous in the Dutch, Flemish and French speaking countries. Because I don’t speak French, and the lack of interest from English speaking people, I decided to stop with the “Willy & Wandy” / “Spike & Suzy” versions some years ago to stick with only the Dutch/Flemish ones.

This last year I received a handful of requests to release English versions of the comics, and also found an unauthorized translation, and however I don’t expect much feedback I’ll give it another go. 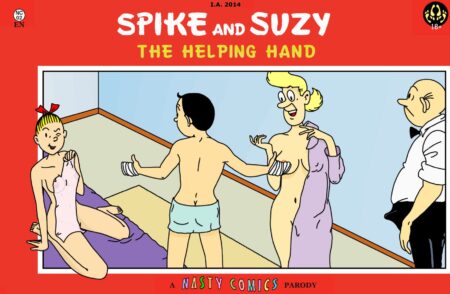 Apart from the ending picture the drawings themselves are the same as in the Dutch version. The balloons are different and sized to fit the English text.

To read, or download: Spike and Suzy -NC02EN- The helping hand

Nasty Comics is also on: